So I've now been doing this DocuSign Challenge thing for just over a week (memo to self: when borrowing blood pressure monitoring equipment from hospital do not even bother asking whether you can sign for it electronically, it sends them into seizures and is no good for your blood pressure). So I've done the only reasonable thing and started looking at accessories for the iPad Mini they've sent as part of the deal.

First essential is a decent case. With a smaller tablet I'm mostly free from big heavy cases designed for laptops so my trusty Marks and Spencer Italian Leather man bag has been perfectly fine; start to put too much stuff into it, though, (sun glasses, a notebook and you're pretty much stuffed) and you realise it's only suitable for the iPad Mini only. 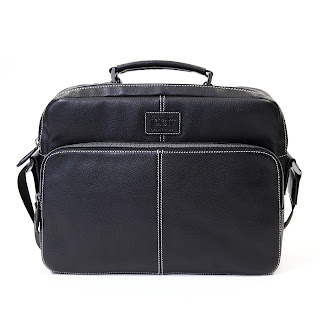 If you have the budget a Jill-e Jeremy bag like the one pictured is an excellent option. Pockets for pens, phone and separate media player are in a zipped compartment you can get to without opening the main body of the bag, your iPad or 13in MacBook Air (this entry is very much for Mac users like me) will be well padded internally and there's an unfastened side compartment for books.

I'd have liked the option to detach the strap but that's about all I'd have changed about this - and maybe the price. Women have had bags for much longer than men, culturally, and are used to paying hundreds: £249.95 seems a lot to pay for something like this from the Apple Store (that's not a sponsored link, buy a hundred if you like and I won't get a penny) but I've been using it since I got it and it still looks very new. Recommended.

Look also at the Booq Boa Squeeze if you want something half the price and are happy with a backpack; I have only seen pictures but it looks as though someone's thought through exactly how to make the interior pockets and spaces almost Tardis-like in their ability to store stuff.

You might also want to consider a cover if you've bought a New Shiny. I've been looking at two; the BooqPad is a folio with space for a paper notebook. This will go against the grain for many iPad users but I find it very useful; whether I'm jotting thoughts for a new stand-up routine or making a quick note of something for a do-list, sometimes paper is better than switching on a screen, so something to hold a couple of cards, a pen, an iPad Mini and a notebook is useful. It comes in black leather and costs £40. 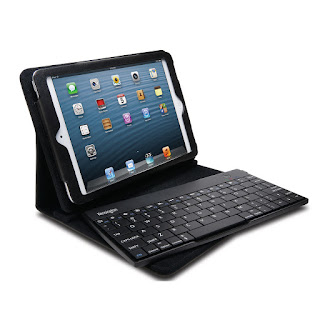 Pricier but more functional for many is the KeyFolio 2 Case and Stand from Kensington. At £79.99 this is a chargeable keyboard in a case which Bluetooths to your iPad Mini but the clever it - the really, really clever bit - is that it's not built into the case, it's attached magnetically. The reason this is good is that a case for an iPad is by definition small and constricted so folding it out and using the keyboard can feel rather cramped and you have to have the iPad almost upright. Remove the keyboard and it still works perfectly and you can adjust the iPad's angle to your taste. I still find the keyboard a bit small but that is what we call in the trade my own damned silly fault for using an iPad Mini instead of a full-size gizmo. I find it great for emails on long train journeys; no doubt someone with smaller fingers would be perfectly OK using it for blog entries like this or full-sized articles.

Depending on your needs you should be pretty happy with either of these.
Posted by Guy Clapperton at 05:51 No comments:

So I've entered this thing called the DocuSign Blogger Challenge. The premise is simple enough and as a tech addict I couldn't resist: just go through three months without signing a wet signature if you can avoid it.

Instead you use the DocuSign app on your phone or tablet. I have duly installed it and have to say it's aaving me a little time already. It wasn't much use when my sports club wanted me to sign to take receipt of something, but in business terms it's been great.

My standard process for dealing with signing stuff has so far been: someone sends over, say, a contract. I print it out, I sign it, I scan it back in. This gets fiddly because my scanner isn't that fond of my printer, so I generally end up transporting the scanned document back to my computer for sending out on a memory stick.

So far I have opened up two contracts on my iPad Mini, supplied by way of thanks by DocuSign (hence the declaration at the end of this post), dragged and dropped my signature, done the same with the date, and sent them straight back. Returning them goes through DocuSign's secure system so I can be certain it's all safe.

I have to say I can't see a downside on day one. Let's see how it shapes up later on.