Is it me or is everyone getting a bid dandified with the pocket square, the folded handkerchief that goes nowhere near the nasal cavities or else?

It certainly seems that way. Since going tailored I've noticed a lot more people wearing them - and I do mean "wearing" rather than using them, they're purely decorative. My tailors at A Suit That Fits (sponsored link) offer one n the same fabric as a suit's lining for £10 when you order the whole shebang; the people working on my new suit right now at King and Allen (not a sponsored link but do mention me if you decided to buy a suit from them and I'll get a tiny voucher) build it in, in other words you can pull the breast pocket inside out and use that.

People are wearing them differently too. The neat triangle sticking out of the top pocket looks neat but a bit waiterish for my tastes. I'm quite attached to the thin, neat line of white over the top pocket of a dark suit with a crisp white shirt - well, I would be if I could persuade the bloody thing to stay at the above-pocket level neatly by the time I get to my meeting. What normally happens instead is that it sinks into the pocket and I might as well not have it by the time I arrive wherever I'm going. Any thoughts on remedies would be most welcome!

The other look I haven't yet mastered (I say "the" other, actually there are a fair few now that I think about it) is the "looks as though it's been stuffed into the pocket any old how, shouldn't match any of the other clothes the guy is wearing and somehow he gets away with it" look. Always seems to go with a suit that ought to look scruffy but is somehow immaculate too, I've noticed.
Posted by Guy Clapperton at 09:04 1 comment:

Could we men all stop whingeing about middle age?

There was a piece in yesterday's Times by William Leith. The link is here but due to the Times' Paywall you'd have to be a subscriber to see it. The upshot of the piece, "Is this really my face"?, is that the author is coming to terms with middle age. He's getting lines on his eyes, can see why people have "a bit of work", no longer recognises the guy in the mirror, has trouble accepting that he's not in his twenties any more.

I've read this article in a number of guises by different people and I have to say I'm fed up to the back teeth with it. William Leith - the latest of many to think he's discovering middle age before anyone else ever did - is 51. Poor bloody William - some people are even older. We all get lines, wrinkles, teeth needing work - most of us don't get paid to write about it. That's a privilege.

Actually I'm rather enjoying middle age. I went to a Madness gig on Friday and there were loads of us - the most ludicrous dad dancing ever, we were all having a brilliant time and would have been much more self-conscious 25 years ago. Experience brings you - one hopes - a steadier income and a steadier outlook than you might have had before. I'm genuinely happier than I've ever been, and don't get me started about the delight that is becoming a dad. Middle age, at the early stages at least, is treating me well.

So I disagree with Leith to an extent anyway. Nevertheless I think what really gets to me is that some of my friends are what can only be described as "female". Several are my age (46) and going through changes which are a great deal less comfortable than a bit of grey hair and the fact that your gut fills out more easily than it used to. Physical symptoms include stomach pain, heavy periods and associated iron loss, and then possible side effects from medication to stem the periods. Oh, and the inability to have kids, which will hit some harder than others. We get the clock ticking - they get an almighty bell tolling.

Not forgetting that as a society we're kind of down on women reaching middle age - especially now that there's so much emphasis on appearance and sexualisation. Women getting back to work struggle much more than a bloke with an uninterrupted career. It's better than it was when I was a kid but not where it needs to be yet.

There is of course nothing to be done about the physical stuff. The female body is what it is, it ages as it will and women pretty much have to get on with it, in the absence of any alternative.

Not us blokes, though, apparently. We go into the national press objecting to our paunches, sagging facial muscles and greying hair as if this were a disaster of epic proportions.

Personally I wish we'd just shut up about it - it beats dying prematurely, there's little physical discomfort by comparison to our female counterparts, there are plenty of compensations and quite honestly all this whining makes us look ridiculous.
Posted by Guy Clapperton at 11:17 3 comments:

Email ThisBlogThis!Share to TwitterShare to FacebookShare to Pinterest
Labels: ageing

Win a suit a month 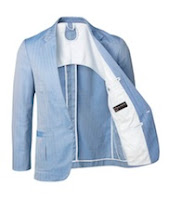 No, I'm not running a competition - but Metro is. Just go to the Metro website by clicking here and then find the link that says "win".

One entrant is going to get a tailored suit every month from A Suit That Fits (usual routine, that's a sponsored link for which I get loyalty points when people click through for the first time, there's no commitment from you). I have a few of these and they look fine. Recently they've been pushing the cotton jacket on the left; my guess is that it will crease up dreadfully very quickly although if I had a new suit every month I'd probably get one for the hell of it.

I have to admit that although the prize is generous - if the average cost of a suit from them is £350 that's around £4225 worth of prize if you add in the £25 fitting appointment, which I'm sure will also be free - but even if I won, would I really have a use for 12 tailored suits in my wardrobe?

Let me rephrase that. If I won I'm sure I'd find a use for that many suits. Dinner suit, cotton suit for fun, I haven't got a brown suit or anything in tweed - it becomes pretty easy when you're not paying.

I just wouldn't have room to store them, is all. I'm getting another suit, though - following the interview a couple of months back with King and Allen in the summer suits entry I thought I'd take him at his word and buy a pale grey one.

It's more expensive than A Suit That Fits - but I'm getting an additional fitting as standard next week. I'll let you know how I get on.

* As I was writing this entry news came in that ASTF had won the Multichannel Integration of the Year at The BT Retail Week Technology Awards last night. Not sure how much this sort of thing matters to people actually buying the suits, but congrats all round.


Posted by Guy Clapperton at 01:55 No comments: 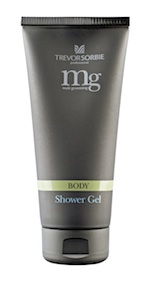 Shower gels are an odd breed. Some smell very strong, others smell of very little - and they all seem more or less to do the job. I've been lucky enough to be sent some samples. I've tried the lot and can assure you I'm very clean.

Pick of the bunch according to my tastes has to be Anthony for Men's hair and body gel. It's just as well I liked this one because the PRs had a bottle I can only assume was intended for a health club or something - they come in massive quantities if you'd care to pay that much. I found the blue chamomile blend soothing and refreshing at the same time, with a pleasant scent which didn't linger.

Trevor Sorbie's Mg offering is similar; does the job, sweet-ish clinical smell that doesn't hang around and then you're off. It isn't aimed at hair as well otherwise it might have been first choice for an idle tight-fisted fool like me (no doubt there'll be a dermatologist along shortly to explain that hair and skin are very different and should under no circumstances use the same cleaner - no matter, the Anthony suits me very nicely.

Another couple I've looked at are from Manatomicals. These aren't quite to my tastes and I think the manufacturer would be pleased to hear it. One's called "Young free and tingle" hair and body wash - I'm 46, married and a tingle makes me worried my circulation's on the blink. It does have a hell of a zingy, minty scent and certainly woke me up; regular readers will know that I'm fond of a dab of cologne so anything that's going to overpower that is probably not for me. But it's pleasant to use, as is the same company's other offering, called "Are you looking to get picked up?"

See the above personal details - 46, married - if I got caught with something with a name like that in my bathroom cabinet I'd probably be on some sort of register within minutes, or at least be considered some sort of weirdo. It has a more subtle blend of mint than the other one and if not for the name I'd be rather fond of it.

But then the fact that something's not aimed at me shouldn't be held against it.
Posted by Guy Clapperton at 10:10 No comments: