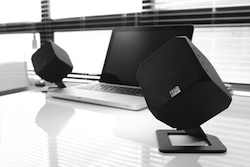 Today I have been playing with new computer speakers. I've made the mistake of lending my trusty Altec Lansings to a family member and I have a feeling they're going to be a while, so I was pleased when a pair of Cubiks from Palo Alto Design arrived (see picture).

Once you've assembled them, just a matter of putting the stands on then linking them up, you need to select them in your sound output on your computer and you can start using them immediately. They look good on the desk, much more compact than my last speakers, and if they don't have the same oomph in the bass department that's probably because they haven't got a great big one foot tall subwoofer under the desk. For the size the sound reproduction is remarkable. They're not cheap at £179 but they're a good buy for people who're going to spend a lot of time working at home.

If I had a couple of wish-list things then they'd be around the cabling. First I'd be wanting a standard audio jack as an option instead of USB; this is fine for the computer of course, but I'd kind of like to try attaching them to the telly as well for better audio. (The manufacturer will no doubt want to point out this isn't what they're for; frankly when I pay £179 for something I like to get a decent bit of use out of it).

The second point is the length of the cables. I'd like my speakers spread a little wider on the desk so I get a bit more stereo spread and frankly it's not going to happen, first because the power attaches to the right speaker and I happen to have my power point to the left of the computer and partly because the cable between the two is only 3ft or so,

These are minor points. I've spent a day at work with decent sound reproduction instead of the tinny internal speakers on my iMac (which, to be fair, never claimed to be a piece of Hi-Fi sound equipment). Recommended.
Posted by Guy Clapperton at 10:21 2 comments:

Paul Smith ties up with Leica 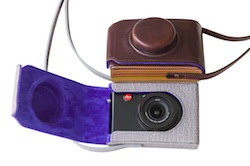 I spent a very pleasant lunch hour yesterday at Leica's shop in London - here's a link to it. It offers courses on photography before you buy and includes courses afterwards with some cameras - no point in spending £5K on an M9 if you're not going to find out a bit about it. Certainly playing with £20K worth of camera kit is a very good way to spend 60 minutes or so of your mid-life crisis, I found.
What really caught my eye for readers here were some very nice limited edition camera cases from Paul Smith, which are pictured here. The grey textured version is probably a little feminine but the brown leather is a beauty, classic in design and sporting the signature stripes for which Paul Smith fans seem to go totally berserk most of the time. It's out in time for Christmas and will set you back £200; make sure the recipient already has the D-Lux 5 digital camera for which it's designed otherwise that'll cost them another £644.
The other design point of note was on some of the more professional models, the red spot (like the one in the picture above) is going to be removed, with a more discreet logo on top. Apparently these are used often in war zones by photographers, and having a red spot just about where your eye's likely to be wasn't quite what they wanted.
Posted by Guy Clapperton at 07:33 4 comments:

The guys at A Suit That Fits (sponsored link) have come up with a new wheeze. Well, a very old one I suppose - the age of the detachable collar and cuff is back, it seems. In the olden days people used to freshen up their shirts by attaching fresh collars and cuffs, and didn't have to wash the whole shirt for a few days.

There are times when our ancestors' habits really start to make me pleased I wasn't around at the time. Men in particular - and this is within living memory, I'm only talking about the 1970s - would regard deodorant as something a bit girly or alien, it would go nowhere near them; a generation earlier, we're now reminded, they would change part of a shirt rather than the whole thing. Of course the climate has changed so during the summer in particular it's much hotter now than it would have been in the detachable days, This is the reason why I'm hoping the idea won't catch on as a means of saving on washing time and soap suds; we're a different generation, we're more aware of hygiene, oh sod it, we're cleaner, OK?


Where it's likely to score is in the multi-use stakes. I bought a shirt from these guys a little while ago with one of their three button high collars, just for a change. My wife informs me it's ghastly. If the detachable collar had been around at the time that would have been fine, I could simply have whipped it off and put something more classic on in its place. Likewise I have shirts of which I am very fond but which need cufflinks every time and the occasion's not always right (cufflinks and jeans is a very particular look to carry off, and whatever it takes I haven't got it). The ability to whip double cuffs off a clean shirt and put a single on with buttons instead could save my having to buy another shirt.

Prices are £80 for a shirt with detachable collar and cuffs, three shirts with five detachable collars and cuffs or five shirts with five collars for £285. If I didn't have more than enough shirts already I could be quite tempted by the middle option because of the choice you'd get. I do wonder, though, whether the market's going to welcome a move back to this sort of dressing.
Posted by Guy Clapperton at 10:17 2 comments:

A few weeks ago I blogged about Debenhams' latest innovation, the Beauty Club iPhone app. I mentioned it was having teething trouble so I thought I'd try it again as there have been some updates. Without any trouble at all I was able to order a small bottle of Emporio Armani Diamonds For Men eau de toilette, a firm favourite of mine.

Mechanically it's a pleasure to be able to report the app is working faultlessly, then. The design could still do with a more masculine version as it's clearly aimed at a female market. Presumably someone has sat down with a spreadsheet and worked out that the female market for "beauty" products is vastly bigger than the one for the male of the species; I've commented before on how we need a new word for "beauty" when we're talking male products but failed to come up with anything better.

Diamonds is a really good, light smell for men. There's a sharpness and pepperiness that I like very much, blended with a bit of citrus and bergamot. It wears well during the day, not overpowering but lasting quite some time.

I thought this was just about the perfect summer scent, and asked Debenhams' PR team why there had to be a summer version as well. (The easy answer is "because customers will buy it" but that's just cynical). Obligingly they sent a sample through and for once I have to say I found the seasonal version even better. A bit of extra lemon zing, splash of cocoa at the base notes and you have something which I think is really excellent. My wife, on the other hand, thinks it's got "that Armani smell" and she still says plain non-seasonal Armani Code suits me better. For me the Diamonds Summer edition is probably the best scent on the market.

I've also been trying Eau de Toilette Verdon by L'Occitane, available from QVC. More in-your-face then the others on test, there's a distinct and not unpleasant whiff of lemons about it with a woody base. Strong but more subtle than previous L'Occitane offerings I've tried, I'll certainly be using this on occasion.

P. S. You might notice I'm calling these bottles eau de toilette (correctly) in the text. They have no astringent or cut-healing properties, which is what an aftershave does. I am of course cheating and putting "aftershave" in the headline because most men use the stuff interchangeably but will search Google for aftershave rather than EDT.
Posted by Guy Clapperton at 06:31 No comments:

So I'm just considering buying a new pair or two of shorts for the summer - the waistband on the others has obviously shrunk in my drawer over the winter - and I see this Tweet from @iainmartin1, who says: "Gets worse every summer. The spread of the awful 3/4 length casual trouser for men continues."

I kind of know what he means. We rarely look terrific in shorts unless we're actually playing sport, in which case the redness of my face makes a welcome distraction from the leg area. Put on a few pounds and the tapering off into your ankle makes you look like a Weeble.

But I'm still going to get some, partly because I work from home so don't care, they don't bother the dog, and partly because of my sense of equality and natural justice. It's the summer, it's getting hot and I'm going to be sensible. This means it's that time of year when women are apparently around to trot around the place half naked and we men are expected to swelter, particularly in formal situations - in spite of the blog entry I did a while ago on suits for hot weather, there really isn't a way of looking smart without sweltering when the temperature goes up.

So I'm having cargo shorts and the hell with the fashionistas. Yes, they'd look better if they were on a younger man or someone slimmer (a lot of things would) and no, I won't wear them to meetings, I'll still be in suits for those. But at least - hopefully - I won't pass out in the heat or something ludicrous.

It could be worse. Those of us who grew up in the seventies will remember the old-style shorts as worn by footballers and tennis players - basically underpants with slight flaps. Given my current physique I can only think...yicch.

Posted by Guy Clapperton at 06:43 No comments: