Christmas presents 1: Scent to you 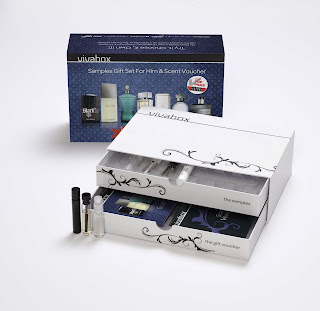 Now this is a good idea. The new Vivabox, available in exotic venues like Boots, is simple but genius. Costing £37.99, it consists simply of seven small samples of eau de toilette - you can buy one set for men and one for women - and a voucher for a full bottle of whichever you like, from The Perfume Shop. It's as simple as that.

The even better news is that the scents aren't rubbish. My wife wasn't drastically struck on the selection for women but she's a fussy whatsit who's fond of her Jo Malone - you know, the seventy-quid-a-bottle factory (it's rather good but then it pretty much ought to be). She had a selection from Lacoste, Boss, Ghost, Paco Rabanne and more, and no these aren't their second-tier offerings, these are the top sellers.

I was rather happier with my box. Boss Orange Man is something I rather like although my wife doesn't  so that's remained unopened, like the Hugo Man; I'm wearing the Carolina Herrera 212 Men at the moment and it's a little sweet for me (to me it smells feminine; I don't get this 'this one's for men, this one's for women' ethos so many perfume makers think ought to be a hard and fast rule, either you like it or you don't, and if I wanted to smell flowery one day that's down to me).

I suspect I'm going to opt for the bottle of Eau D'Issey but I could also have chosen Paco Rabanne Black XS, Jean Paul Gaultier Le Male or James Bond 007. Actually I don't dislike the James Bond, but you'd feel such a pillock buying something with a name like that - and isn't it ironic that it should come out in the Daniel Craig era; if ever there were a 007 who wouldn't give a stuff how he smelled, he's the one.

It's not a faultless scheme. I can't exchange my voucher online, presumably because it's a come-on to get me into the shop in the first place. That's a valid promotional idea but a Christmas present that's a promotion may not appeal to everyone. Also, I can't go into the shop and use it as a contribution towards a more expensive scent. I'm starting to run short of my beloved Armani Code, but the voucher is strictly for exchange for one of the scents included in the promotion.

On the other hand I don't have to use the voucher until the middle of 2015 so nobody's hurrying me. The samples contain enough for a day or three's splash each, so I can get used to how each of them smells rather than have a quick sniff and buy on the spot.

Above all, if you or your partner have ever had a scent given to you that you don't like, you'll be appallingly aware of how awkward that can be - you think you should wear it when the giver comes to visit, you don't want to be rude...this selection idea is more personal than a bland gift voucher but it also gives the recipient a decent breadth of choice.

I'd get one for someone if I were you - then maybe next year they'll increase the range.
Posted by Guy Clapperton at 02:52